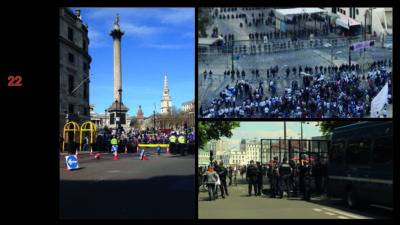 27.03.2017 – Presentation at the University of Westminster: International Relations and Politics

This Monday Alex Ioannou and Jens Haendeler had the chance to present some of their fieldwork to students of international relations and politics at the University of Westminster as part of a course coordinated by Dr. Elisabetta Brighi. The workshop featured of a short presentation in which Alex and Jens juxtaposed strategies, techniques and tactics of securization and counter-terrorism in London with their instantiation in cities of the Global South and the Middle East. An open discussion and a short workshop in which students would map their everyday journeys through London followed the presentation. The evening was (sadly) timely with the London terror incident in Westminster having happened just a few days ago and stirring up discussions about the militarisation of the city and its legitimacy.

While borders marked by fences and walls divide our landscapes into ‘here’ and ‘there’ and our social relations into ‘us’ and ‘them’ global cities unite those otherwise separated territories(1). It is in the global city where openings occur that allow for a new form of politics that enfranchise those citizens who in the traditional western city would have been disadvantaged. It is in our cities that strangers, migrants, and ‘locals’ are empowered to make a history and become political subjects rather than passive objects. (2) In contrast to the possibilities embedded into our urban geographies governments, authorities and corporations operate under a neo-liberal ideology and are obsessed to surveil, profile and control bodies transversing our cities and landscapes. Stemming from this post-cold war imaginary of securisation a new military urbanism arises that transforms our borderlands and cities alike. (3)In this short presentation we will juxtapose spatial interventions from London and Calais with techniques and tactics employed in contested territories in Jerusalem and Cyprus. By exposing the neo-colonial logic behind architectural interventions in London and Calais and by means of investigating its links with the London Olympics and war zones across the globe we demonstrate that colonialism is not a historical era but rather the logic of control and extraction that cuts deep into the everyday life of our landscapes and cities.