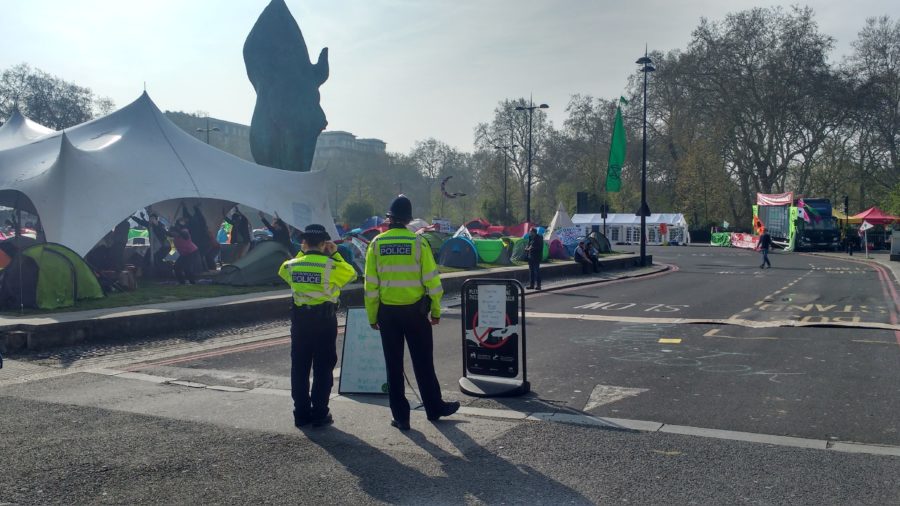 In a podcast with Leopold Lambert, Andreas Philippopoulos-Mihalopoulos talked about the idea that the law is always present in a space to a matter of degree.

“There are some environments where the law is absolutely thick, the presence of the law is so dense,like the court room as you probably know… In English courts you cannot use, you cannot drink water for example from the bottle. If you use a bottle, even a small little – you know Evian bottle, you can still be castigated by the judge because this is disrespect in a sense.

In other cases where it seems perfectly, I would say anomic, from anomia – which is the absence of the law or absence of norms – and one of those things that there has been some work on is this White Cube. The famous White Cube of contemporary galleries and art, and you know, this mausoleum of perfect conditions and perhaps this is a perfection at work.”

The area around Marble Arch is not an English court or a contemporary art gallery; it is essentially around-about. The nomadic nature of the community that have settled on the island, and are sprawling into the roads, present a break in the normative movements in this space.

I wonder how much these demonstrators,activists, protesters (or just plainly: citizens) feel the law. What matter of degree of thickness or density is exerted on them within the space?

Yes, the police presence cannot be ignored but it is clear that the laws and delineated areas of the site are abandoned.

However, the law is not simply found or enforced by external factors, it is found within the community itself.

New ‘laws’ replace the old ones.

Philippopoulos-Mihalopoulos reminds us that “the law is not abstract and outside one’s body, but very much dwelling within and among one’s molecules.”

Extinction Rebellion is purposefully disrupting the punctual system they have found.

“Opposed to the punctual system are linear, or rather multilinear, systems. Free the line, free the diagonal: every musician or painter has this intention. One elaborates a punctual system or a didactic representation, but with the aim of making it snap, of sending a tremor through it. A punctual system is most interesting when there is a musician, painter, writer, philosopher to oppose it, who even fabricates it in order to oppose it, like a springboard to jump from. History is made only by those who oppose his-tory (not by those who insert themselves into it, or even reshape it). This is not done  for  provocation but  happens  because the  punctual  system they  found ready-made, or themselves invented, must have allowed this operation: free the line and the diagonal, draw the line instead of plotting a point, produce an imperceptible diagonal instead of clinging to an even elaborated or reformed vertical or horizontal.”

PHILIPPOPOULOS-MIHALOPOULOS,ANDREAS. (2012). Mapping the lawscape: Spatial law and the body. The Arts and the Legal Academy: Beyond Text in Legal Education. 119-133.